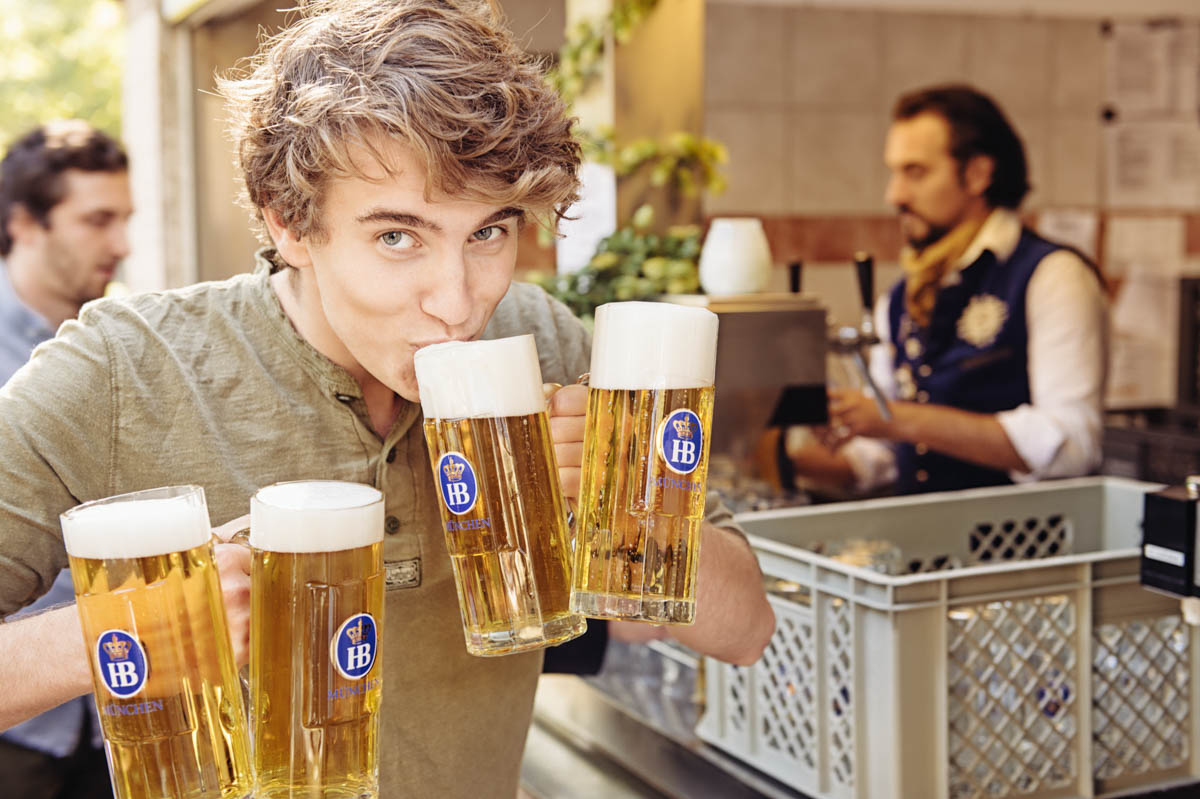 It’s incredibly rare that Tom Hussey photographs something that doesn’t walk and talk. He identifies as Texan but lives in a world without boundaries. Running an impressive advertising production company based in Dallas, he's mixing out work that repeatedly catches notice, honors, awards, features and praise. In 2011, he earned the distinction of being named one of the Top 10 Creatives in the World by Adweek from an international field of nearly 2,800 artists. That remarkable triumph came as a surprise to him, but not to anyone else.

Most notable about Hussey is that he allows himself the freedom to continue the random exploration of all things visual. He’s an extremely patient listener and practical man, often described as being one of the nicest guys in the business. Hussey is adamant about promotion, combining the need to consistantly market his talent with his desire to discover inspiration. Part of that is his philosophy that you have to be everywhere because you don’t know where you’ll be found, and the other part is that he’s been clear in his head from the start that he’s not in this to be a starving artist.

Hussey says the best thing about his business and career is meeting and learning about different people who do all kinds of different things. Recently he took a project that included “shooting” a series of radio commercials, finding himself directing talent in front of a microphone instead of a camera. That odd job exemplifies what’s at the heart of his creative drive and shows how he maneuvers his life to persistently embrace what’s new.

What’s taking up most of your time each day?

Just keeping up with all the images we capture. In some ways, back in the day of film it was easier. You just took the images to the lab and the lab made pictures and you were good to go. But nowadays, you have to manage all the technology so I probably spend more time than I should dealing with that kind of stuff. 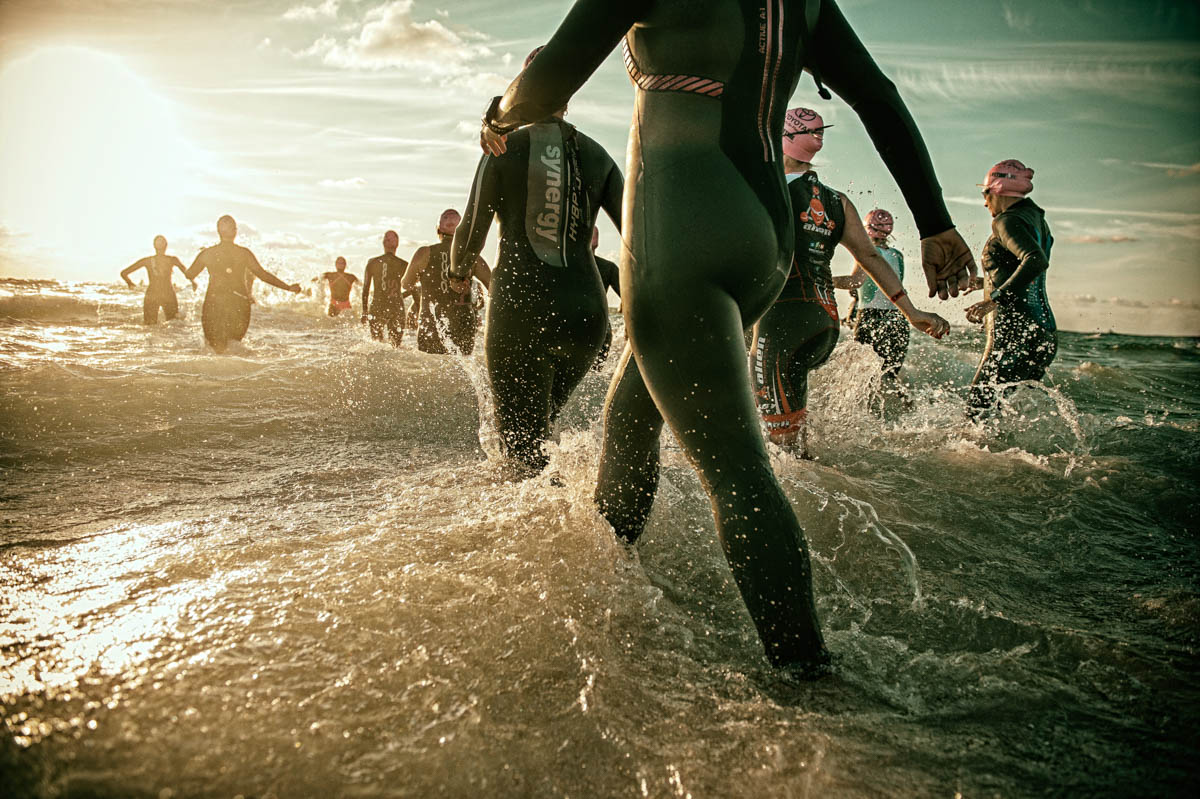 Is there anything you are specifically working towards achieving or finishing?

Long term, I’m working towards a new website and I’m constantly working on new portfolio stuff. We’ve been talking about different things we’re going to do coming up. We’re about to do a big promotional mailing, too. All the normal stuff that keeps the machine going.

What do you want to achieve with your new site?

We’ve been using a template website that’s worked well for us. When I launched my very first website, back in the mid-90s, most of the photographer sites at that point were basically just slideshows—and I didn’t want that. I wanted something interesting and different, something that would be more creative and so I approached a design firm and we came up with the “Hussey Motel” (sort of making fun of my name). It was very conceptual and won a bunch of national awards. So I’ve come back to that same designer recently and we’re trying to come up with something that’s not the template. We’re working through what is working and what isn’t and where do we go from here. When we come up with something it will be different and make me stand out, because that’s obviously what it’s all about.

Yes, it’s the constant world we live in where everyone needs instant gratification. I grew up shooting film and in switching to digital, one of the things I love about digital, is that we get to see that image immediately. Then you get so used to that. I think some of the art directors today, they’ve never had the experience of waiting for something to come back from the lab—instant is just the norm. That seems to translate to everything. You want your car washed immediately, your suit back from the cleaners today. In some ways it’s good, in some ways it’s bad. Sometimes the speed at which we can do things set expectations that are unrealistic.

For your promo mailings, how do you plan those?

We do a lot of promotions. We try to send something physically in the mail about every six weeks and usually it’s more elaborate than just a postcard campaign. We’ve got a promotional book that’s due to be back from the printer this week. We have a little mini-promotional series we’re getting ready to print and that’s the fourth one in that series. We try to keep ourselves interested and inspired because, really, we want to emulate our clients. We want to work with people who have inspired projects. We want to do things that are fun for everyone and hopefully we can send out a promotion that strikes a chord and inspires somebody with a project they are working on and that’s why they pick up the phone.

No doubt, your promotional strategies certainly work and that’s how your “Reflections” campaign came about, right?

Yes, that campaign was based on a portfolio shoot to illustrate the concept of thinking of yourself as younger than you are. The idea struck me after meeting Gardner, a WWII veteran who was turning 80. He told me he just didn’t feel it was possible he could be 80 years old. Since I was approaching 40, I realized I was thinking the same thing and imagined it must be a very universal feeling. So I photographed Gardner staring into his bathroom mirror and seeing himself as a 25-year-old man. I ran the image for a Workbook ad which eventually landed me a big job for a multinational pharmaceutical company that wanted to illustrate the concept of maintaining long-term memories. The campaign has been extremely successful and people universally responded to the images. And I still advertise in Workbook, along with At-Edge and Lürzer's Archive. 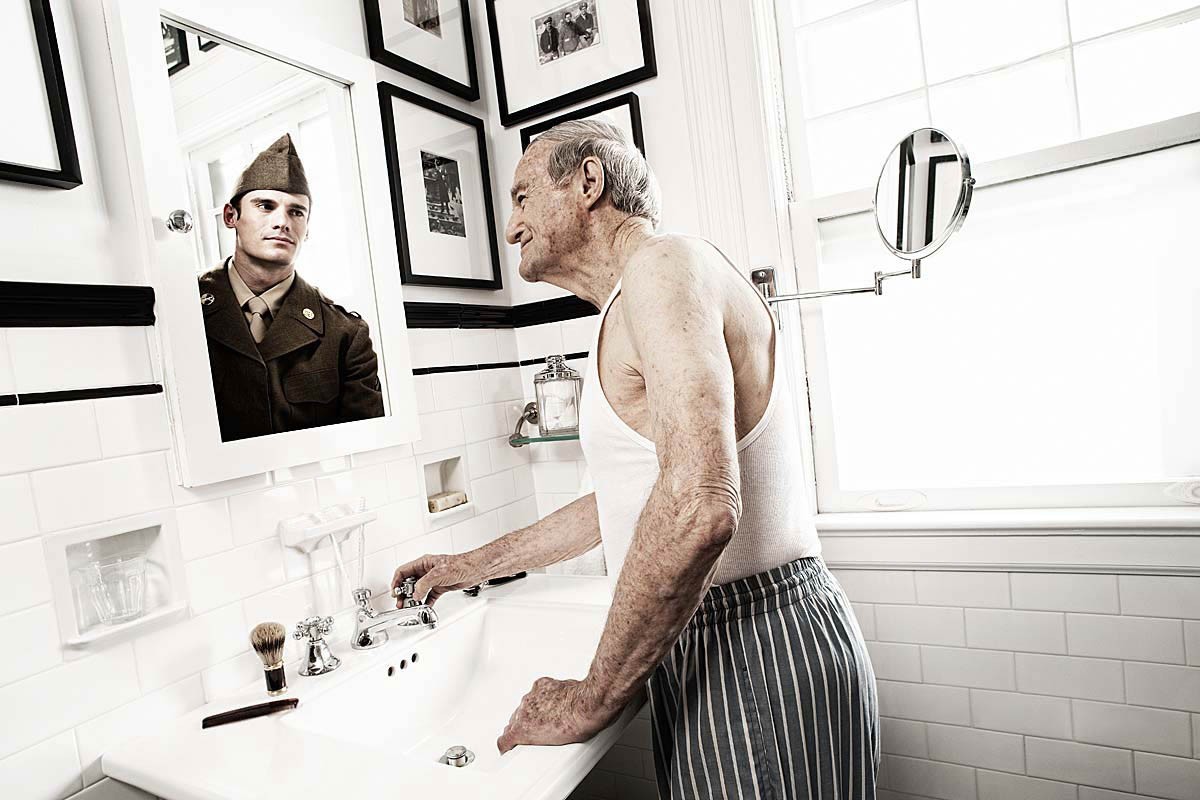 Do you think people are taking up the profession because it’s so accessible now and not necessarily because they have the talent or the dedication it takes?

I wanted to be a photography teacher after I earned my master’s degree at Rochester Institute of Technology in New York. I learned from an early point what type of photographer I didn’t want to be—a portrait or wedding photographer. That just wasn’t my personality. I wanted to be creating something different every time I picked up the camera and that’s why I didn’t become a catalog photographer because it would be too repetitive for me. At RIT I discovered the advertising side of the business and I did teach for a total of about seven years, which I enjoyed very much.

Back when I was starting out and assisting, one of the photographers I worked with said, “I can’t imagine how people get started now-a-days, it’s so expensive and there are so many photographers out there,” and at the time, I thought, ‘well, I don’t know, I have some camera gear and I think I can do this.’ And now I catch myself thinking that same thing the photographer once told me. So I have to remember that succeeding in this profession isn’t just about having a big studio, it has a lot to do with personality, drive, ambition, vision—and some luck—and certainly being in the right place at the right time with the right portfolio.

I think more and more places are demanding content—both stills and motion—and so there is a bigger market for images than there ever has been. One of the dangers of that bigger market is that it tends to devalue the individual pieces. For the advertising side of it, students and newcomers need to learn the business aspects of it and what it costs to do this. It’s not just push the button and have a Mac and process a tiff and off you go. There’s so much more to it. It seems to me that students who are transitioning into becoming assistants are getting better business training which is encouraging. They are certainly getting more than the half-hour lecture about business I got. 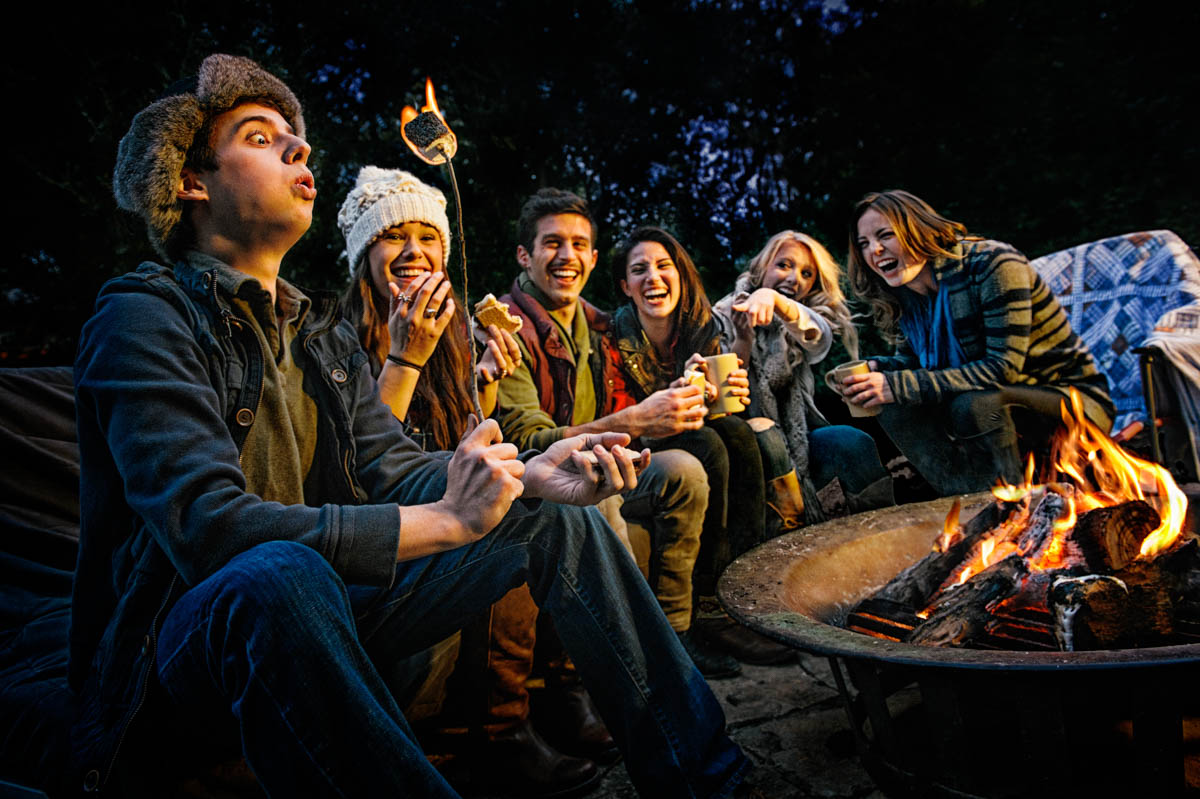 Do you think this concept of User Generated Content, that “unexpected” look that isn’t produced but has to be produced, is here to stay for a while?

The clients want “real people” and that’s fine, I don’t mind that. It’s a challenge and it’s fun to try to create things that don’t feel or look produced, but it’s also very difficult. Especially when all the different players come in to mix things up. It can get really challenging. Clients also want a lot of extras with each shoot and we have to be flexible enough to provide all of the content pieces they want. With so many platforms for visuals, the briefs have drastically changed.

At this point, a vast majority of the projects we work on have traditional and non-traditional shots and some sort of motion content is included, be it animated gifs or slow-motion video clips that a client can run in a banner ad, or the full-on TV commercial production that we do. We wear more hats than advertising photographers have ever worn in the past.

What is your process for realistic casting? Do you cast your portfolio from headshots or do you like to use people you see out and about?

When we’re shooting for the portfolio we’ll look for situations and then find people within those situations. But probably 99% of the jobs we are hired to do involve a casting director. We used to do a lot of the casting ourselves and I do like that because I can see how people react in front of my camera before I get them on set. But without that luxury, I’m very particular about what casting directors I use. My producer is excellent about making sure we have the right talent and crew.

How has the advertising photo scene in Texas changed in the last 15 years? Is it more robust, more competitive, easier to land big, national jobs?

Dallas is a good market and we certainly shoot for many Texas clients. This has been my base for most of my career but we are busy on location all over the country and all over the world. We shoot in Miami, and we shoot in New York a ton—I think New York is the most frequent place. We did a shoot in Paris recently. I have a rep that just handles Texas and another to handle the rest of the planet. We are certainly working in the Texas market but we are working on more national projects, too. The location here is so central making it easy to get anywhere. Dallas is booming. Plus the cost is living is great and there is no state-tax here and there are a lot of plusses, but mostly: it’s home. 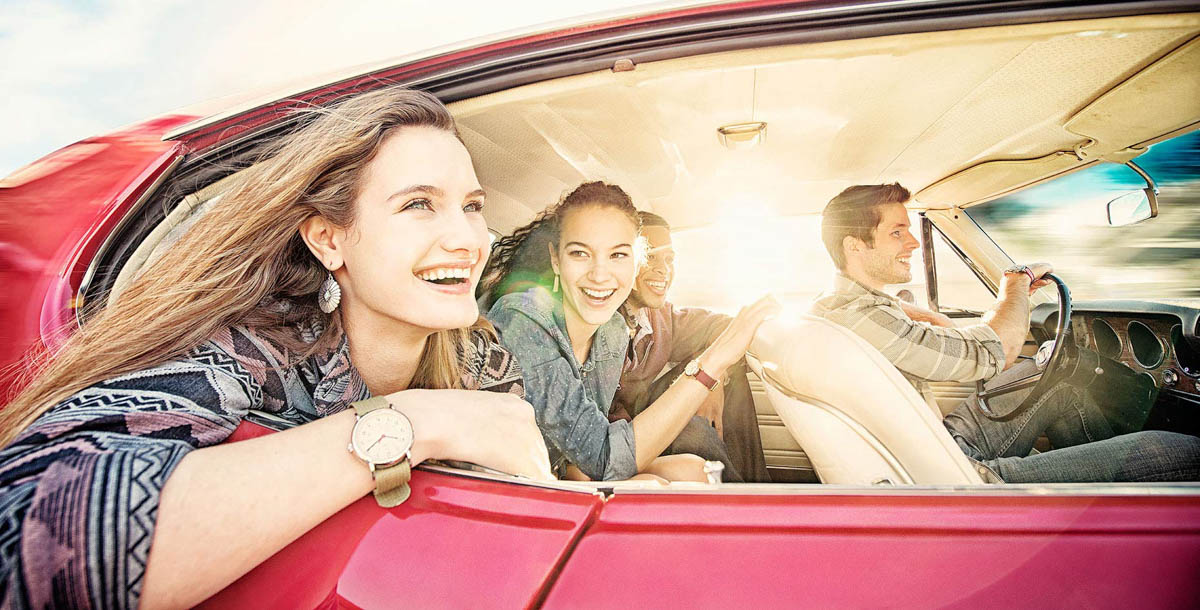 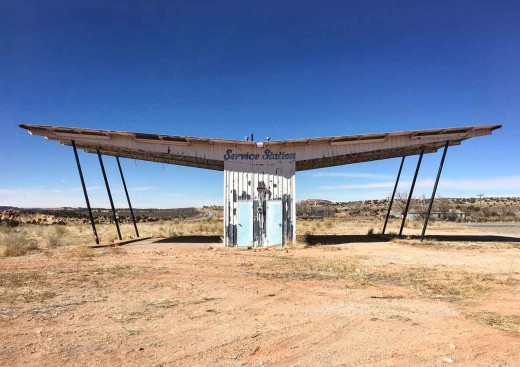